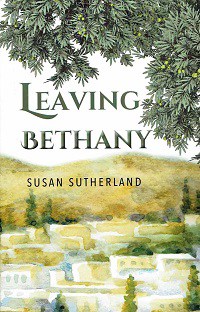 Judea 32 AD.  It is a day like any other when Martha, a young widow, meets a travelling Rabbi called Jesus. To become a disciple is a dangerous decision, but one Martha must make. Those who killed Jesus are now looking to stop the new believers by any means possible, including murder. It is only a matter of time before they come for her family. Can she find the courage to sacrifice everything to save those she loves? 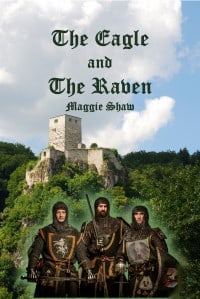 The Eagle and The Raven by Maggie Shaw

When Knight Gendal offers to take a message to a remote clan in 14th Century Bavaria, the act of kindness ignites a revolt. Knight Gendal and travelling companion Sir Rehlein get drawn into the fight to free Count Bertram and the Children of the Raven from the despotic rule of Nicolaus, Duke of Danuvia. Despite their best efforts, their plans to avoid armed conflict drag them ever faster towards the battle that could cost them all their lives.
Buy Now 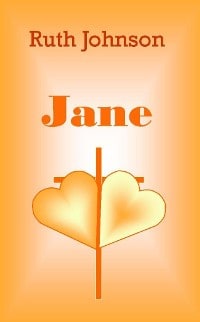 Book 1 – 1966: Jane’s sheltered existence is disturbed by the caresses of a stranger in a darkened room. Haunted by the incident she determines to experience life. Her encounters and challenges bring fun and fear as she searches for the reality of love. But love is gently hovering awaiting release and its unexpected arrival encompasses all her heart’s desires… 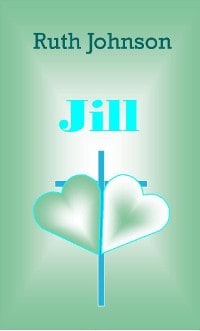 Book 2 – 1968:  Jill, despite many failed relationships, is looking for Mr Right. A chance encounter sets off a chain of events which threatens her, her friends and family. In this Jill discovers there are many faces of love, but there is only one who will bring her the fulfilment of her heart’s desires… 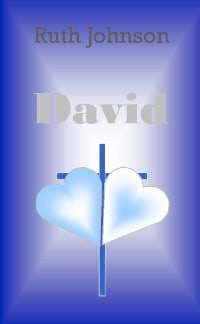 Book 3 – 1970: David likens his marriage to riding a rollercoaster blindfold, their shared love the track that holds, keeps and guides them. It’s in going from the greatest exhilaration to the darkest despair that he draws on love’s strength and finds it casts out fear, brings restoration and expands his vision to re-evaluate his heart’s desires… 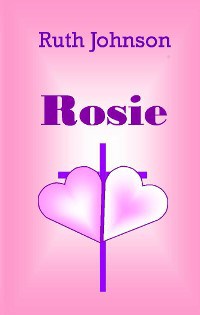 Book 4 – 1972: Rosie has found love and contentment, but anguish squeezes her heart as history seems to be repeating itself. Hurts and fears taunt her as she struggles to decide if a marriage of convenience is too high a price to pay for the joy of motherhood. The tenacity of love draws her to confront her heart’s desires… 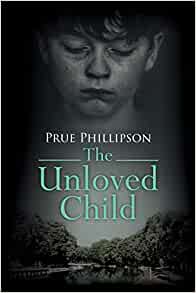 The Unloved Child by Prue Phillipson

A passionate tale of two brothers set in the Tyne coalfield from 1802. The elder, unloved, builds bitter hatred towards his loved brother and takes his revenge when they grow into manhood. Only the mother’s public revelation of her secret guilt can save a terrible ending.

The Unloved Wife by Prue Phillipson

7 years on the unloved child returns triumphantly to transform his familiy’s lives. He is wealthy, with a Spanish aristocratic wife and a son he loves passionately. But his wife is ignorant of his mining background and cannot settle and it is his own life he upsets with dire consequences.
Buy Now 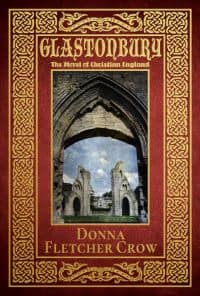 Glastonbury saw it all—armies marched, cultures clashed, kingdoms rose and fell—but through it all Glastonbury remained a place of serenity, prayer and reconciliation. As the last of the Glastonbury monks searches back through the pages of recorded history in a valiant quest to find meaning in the struggles those broken arches stood witness to—seeking for the Holy Grail itself—so his odyssey becomes every person’s journey for the meaning of life and hope for today. 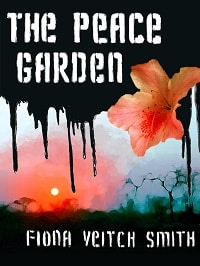 When 12-year-old Natalie befriends an Apartheid era political activist from South Africa, and, years later, falls in love with his son, she is drawn into a world of political intrigue, racial tension, international terrorism and … gardening. Paperback & ebook (Crafty Publishing) 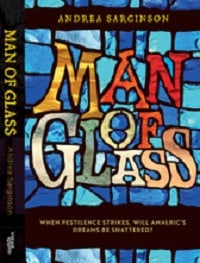 Man of Glass by Andrea Sarginson

In 1349, Amalric, a stained glass apprentice, faced the arrival of a pandemic. When it raged through his village in East Yorkshire, it changed his life and work as he experienced the conflicts between art, medicine and faith.  Hope lay in love and the people he came to know as friends.   Softback available from andrea.sarginson@googlemail.com at £5 plus postage.  Published February 2020 by Instant Apostle.

Beyond the Samovar by Janet Hancock

In 1919, a young English couple, Livvy and Peter, leave Baku, which the previous year became capital of an independent Azerbaijan.  With their baby, they bluff and bribe their way across Bolshevik and White Russian territory to Archangel on the north coast of Russia hoping to board a British ship.  Only two of them reach an England little recognised after an absence of more than five years. 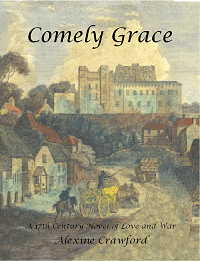 The first of two historical novels based in Farnham, Surrey, in the 1640s. Comely Grace features war, separation and rivalry.  Reviewers have commended the degree of research in this little known period, and that it weaves effortlessly into the lively human story.
To purchase, contact the author on alexine.crawford@gmail.com 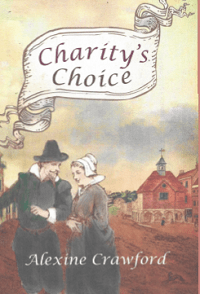 The second of two historical novels based in Farnham, Surrey, in the 1640s. Struggles for freedom and democracy echo domestic conflicts in Charity’s Choice, with the nature of forgiveness.
To purchase, contact the author on alexine.crawford@gmail.com

The English King who fought the Danes – In 1013 the Danes invade England. King Aethelred is old and ill-counselled. Can his son Edmund prove a better king and drive the Danes out? In the ensuing struggle, many good men will die and Edmund will earn the nickname Ironside. (£7.99)
Buy Now

Edward the Exile by Fen Flack

Edward the Exile – Disaster strikes and Edward, the son of Edmund Ironside, is forced into exile and has to flee from country to country seeking a safe haven. Will he ever be able to return to his true home – England? (£7.99)

Margaret and Edgar by Fen Flack

Margaret and Edgar – Edward, the son of Edmund Ironside, returns form exile, but all is not well. In 1066, when the Normans come, his children Margaret and Edgar are forced to flee, with life-changing consequences for them both. (£7.99) 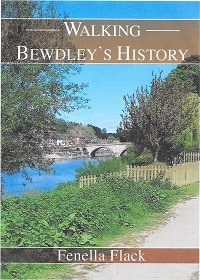 The name Bewdley means beautiful place. The town has a fascinating history and it is set in stunning countryside. The book helps you to explore both. (£6.50)
Buy Now 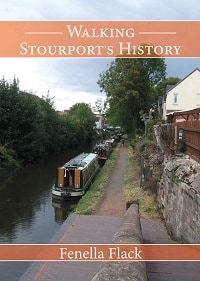 Stourport is unique, being the only inland port created by the canal system. Some may think it therefore has little history, but walk its paths and you will be pleasantly surprised. (£6.50) 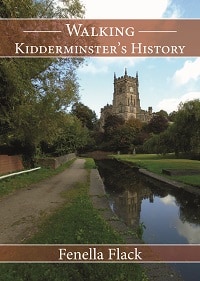 Kidderminster is rightly famous for its carpet industry. Though much has been lost, there are still gems to enjoy in the town and surrounding countryside. (£7.50) 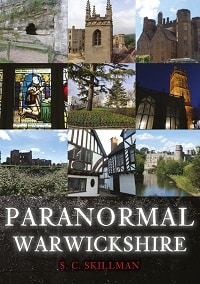 Warwickshire is a county steeped in the supernatural, as befits the county of Shakespeare and the many ghosts and spirits he conjured up in his works. In this book, author SC Skillman investigates the rich supernatural heritage of this county at the heart of England in places both grand and everyday, such as Guy’s Cliffe House, Warwick Castle, Kenilworth Castle, Stoneleigh Abbey and the Royal Shakespeare Theatre, as well as several locations in the towns of Leamington Spa, Rugby and Nuneaton.
Published by Amberley Publishing on 15th November 2020.
Buy Now 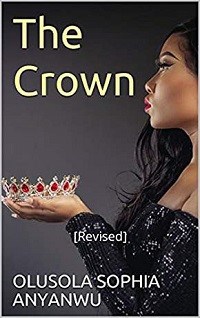 The Crown by Olusola Sophia Anyanwu

An enticing and adventurous read that reveals the surprising and shocking experiences of two women in their jobs. Their highs and lows make readers cleave to every page till the end! A fantastic read full of intrigues, suspense, tension and a school riot!

The Healing by Joy Margetts

Driven to despair by heart-breaking betrayal, nobleman Philip de Braose has lost faith in God and man. Working as a soldier for hire, he recklessly seeks death and is brutally injured, only for rescue to come in the unlikely form of a Cistercian monk.

This joy-filled, kind and compassionate man walks alongside Philip as his body slowly recovers and he is forced to confront the more painful wounds within.

A Second Christmas Truce? Christmas on the Western Front, 1915 by Karen Ette

Christmas 1914 was not the only documented suspension of hostilities during the First World War – another cessation followed in December 1915, but it is far less known. Is the second truce fact or fabrication?
Buy Now 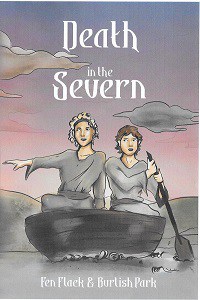 Death in the Severn by Fen Flack and Burlish Park

(‘Burlish Park’ is the pen name of 56 Year 5 pupils at a local primary school.)
The Anglo-Saxon folk at Wribbenhall in North Worcestershire are horrified to find the fish in the river are dying. Can Matthew and his new friend Osgot solve the mystery? Or will there be more deaths before a solution emerges?
Jenny Shaw, author and former Primary School Teacher, writes “I very much enjoyed reading this book. Fen has completed an unusual task by weaving the words of Year 5 students in with her own to create an exciting story which will appeal to all ages.”
Buy Now 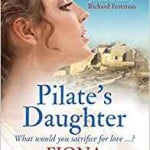 The daughter of Pontius Pilate falls in love with the Jewish Zealot sent to kill her. An historical romance

Don't Be Late in the Morning by Karen Ette

The first, and only, novel about Leicestershire in the Great War, Don’t Be Late in the Morning is written from original, unpublished letters and diaries, filling a lacuna in British Great War fiction. 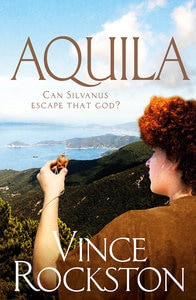 When young Silvanus meets the bizarre old hermit Cerbonius, he begins to question everything he knows. Are his ambitions far too small? 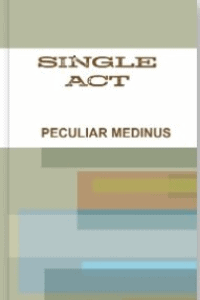 …A thought to the man who has narrowed a woman’s destiny to her body. One encounter with a Prince shattered the destiny of a Princess. Was the daughter of Jacob disowned in disguise? 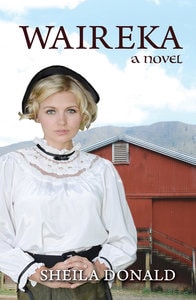 A story of love and commitment set against the farming background of nineteenth century New Zealand. It follows Eliza’s journey from her home in Scotland to Wellington, New Zealand as one of the first early pioneers.
Available from author at journojohnson@aol.com

In 40AD Senator Vivius Marcianus is forced to travel to Jerusalem by the Emperor Caligula, to investigate the delay in erecting his statue in the temple. But when Vivius is wounded and imprisoned for murder, it is left to his drunken and unreliable brother-in-law to rescue his heavily pregnant sister and her children from repercussions, and set about proving Vivius’s innocence.
‘The Senator’s Darkest Days’ is a thrilling sequel to ‘The Senator’s Assignment’.
Buy Now